Initial Metro Vancouver results report that “a total of  3605 people in the Metro Vancouver region were identified as homeless on March 12, an increase of 30% over the 2014 Count. The sheltered homeless population included  people staying overnight in homeless shelters, transition houses, and safe houses and  people with no fixed address. The unsheltered homeless population included  people living outside or staying temporarily with others (couch surfing) and using homelessness services on the day of the count.

“This latest count shows us that the homelessness crisis continues to grow despite all previous efforts and commitments to stem the tide,” said Mike Clay, representing the Metro Vancouver Regional District as the Community Entity for the Metro Vancouver region. “Homelessness is no longer a problem isolated to densely-populated urban areas – it now affects every corner of Metro Vancouver.”

In Burnaby there were 105 registered and trained volunteers for the 2017 Count. Several of the volunteers paired with Outreach Workers were people with lived experience of homelessness. Sites for Count volunteers were established after extensive consultation with a variety of agencies and professionals.  92 volunteers covered 42 shifts and attended 43 identified sites over a 24 hour period. In addition there were 11 locations administering surveys on site and one special event occurring during the 2017 Count in Burnaby.

Initial Metro Vancouver results report that a total of  69 people in Burnaby were identified as homeless.  This is an increase of 19% over the 2014 Count. 49 people were unsheltered.  19 were staying in emergency facilities and 1 person was of no fixed address. These numbers include 12 unsheltered children and 5 sheltered children under the age of 25 years.

“Homelessness is a life-threatening health hazard. This disturbing fact is increasing shown amongst our Burnaby neighbours living in long term poverty and homelessness. Since 2006 45 known Burnaby individuals have died as a result of homelessness and long term poverty. The average age at time of death is 42. Since the 2014 Homeless Count 24 Burnaby citizens have died.  15 homeless people have died in the past year. Fentanyl has not been specifically reported in any of these deaths. “states Wanda Mulholland of The Society To End Homelessness In Burnaby.

The Burnaby Extreme Weather Response operated by Lookout Society opened the shelter for 76 nights in the 2016-2017 season. This included 709 stays.

The Housing First and Outreach program in Burnaby, operated by Progressive Housing Society, has assisted 244 unique individuals between June 2014- Feb 2017.

March 2015 – August 2016 the Nurse Practitioner working at the clinic in the Progressive Housing office, provided 143 unique diagnoses for 58 client patients.

Each Thursday morning the Outreach Resource Centre, operated by The Society To End Homelessness In Burnaby, assists between 100 – 120 people living in extreme poverty and homeless people with free food, clothing and advocacy assistance. 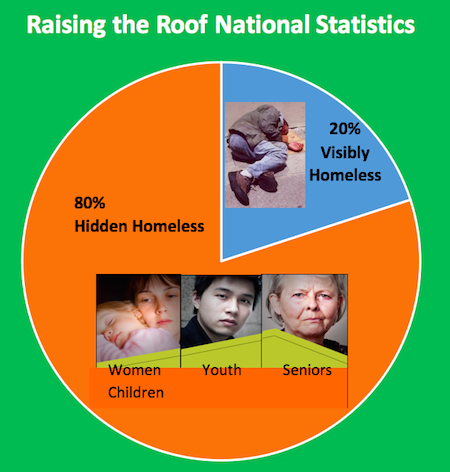 Burnaby participates in the Metro Vancouver Homeless Count every 3 years. The Burnaby count is coordinated by The Society To End Homelessness In Burnaby in collaboration with Metro Vancouver and the Council of Community Homeless Tables.

The purpose of the homeless count is to estimate the number of people who are homeless in the Metro Vancouver region, obtain a demographic profile of this population, and identify trends compared to previous counts.

It is understood that homeless counts underestimate the number of people who are homeless on a given day and the 2014 homeless count was no exception.

Despite best efforts to include everyone who was homeless during the count, service providers throughout Metro Vancouver reported that the numbers underestimate the true extent of homelessness in the Metro Vancouver region. 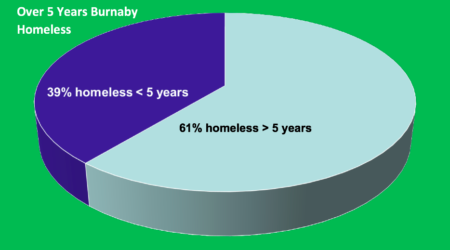 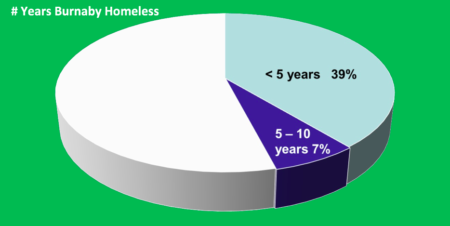 58 people were found to be homeless in Burnaby 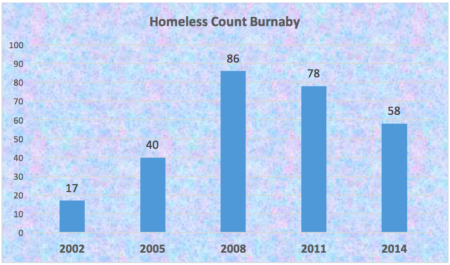 The following calculation was used to estimate the annual prevalence of homelessness in the Metro Vancouver region based on the 2014 homeless count.